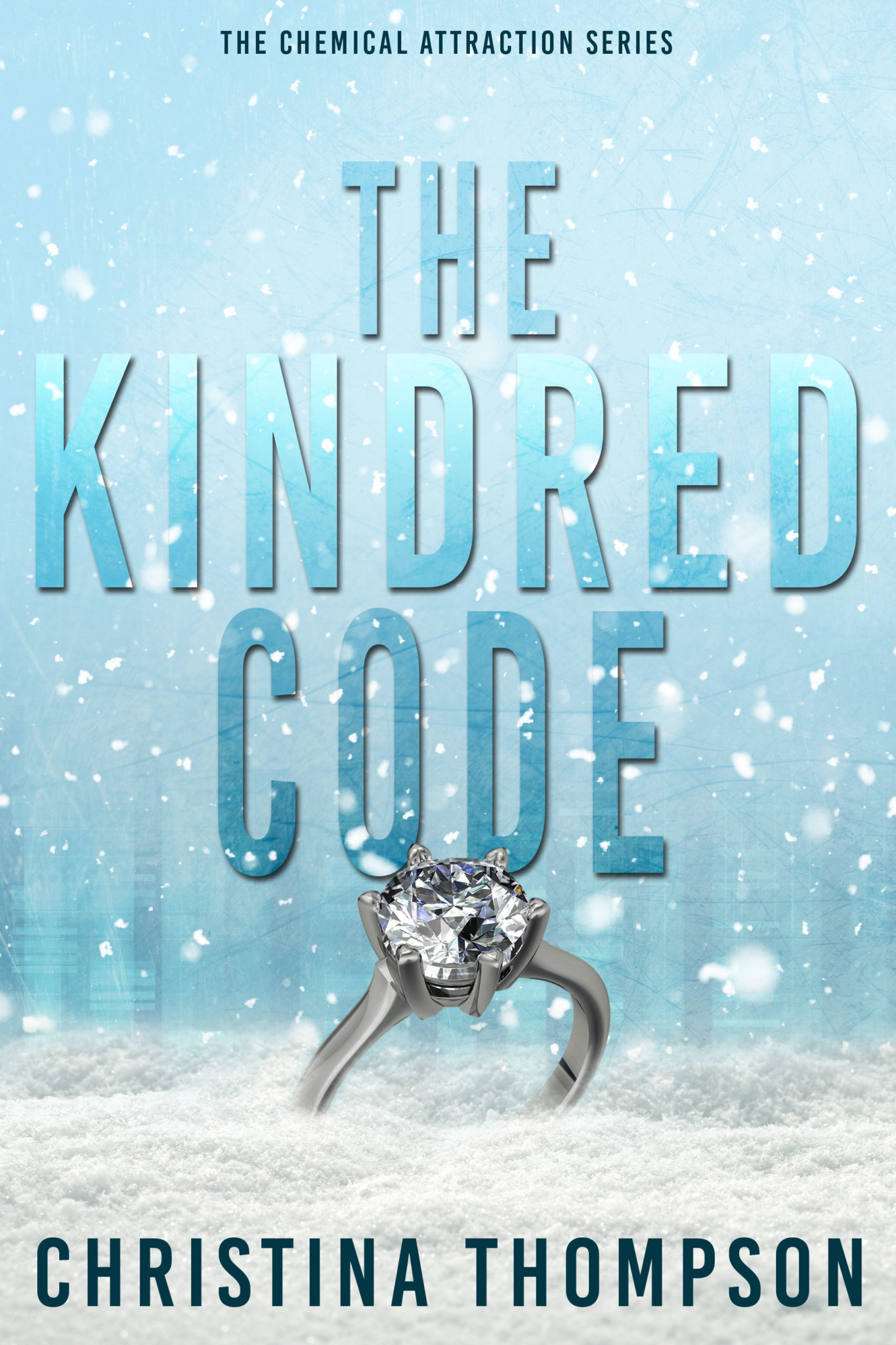 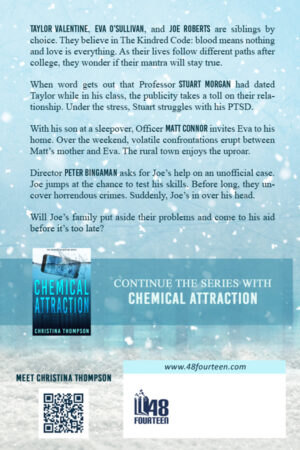 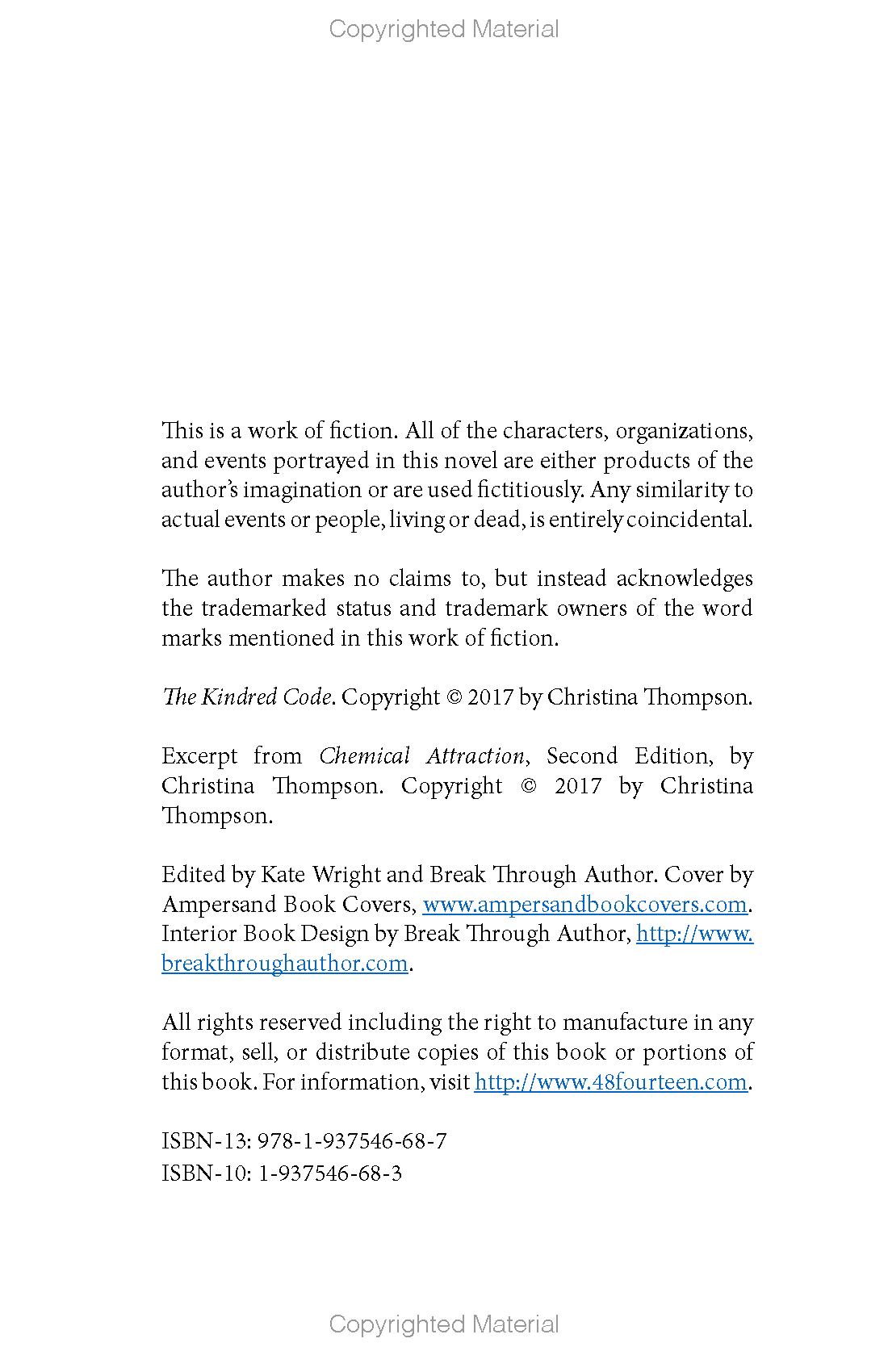 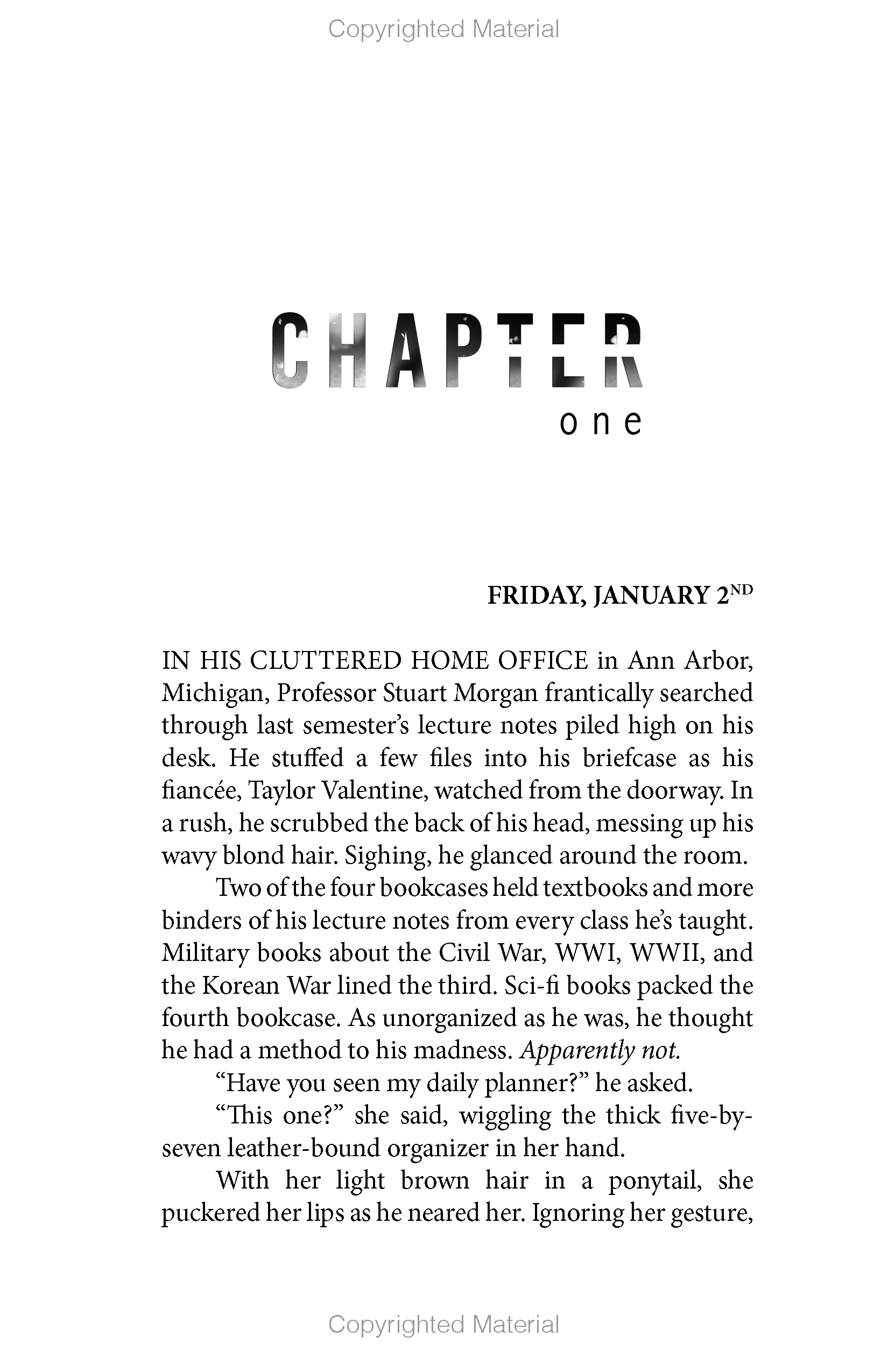 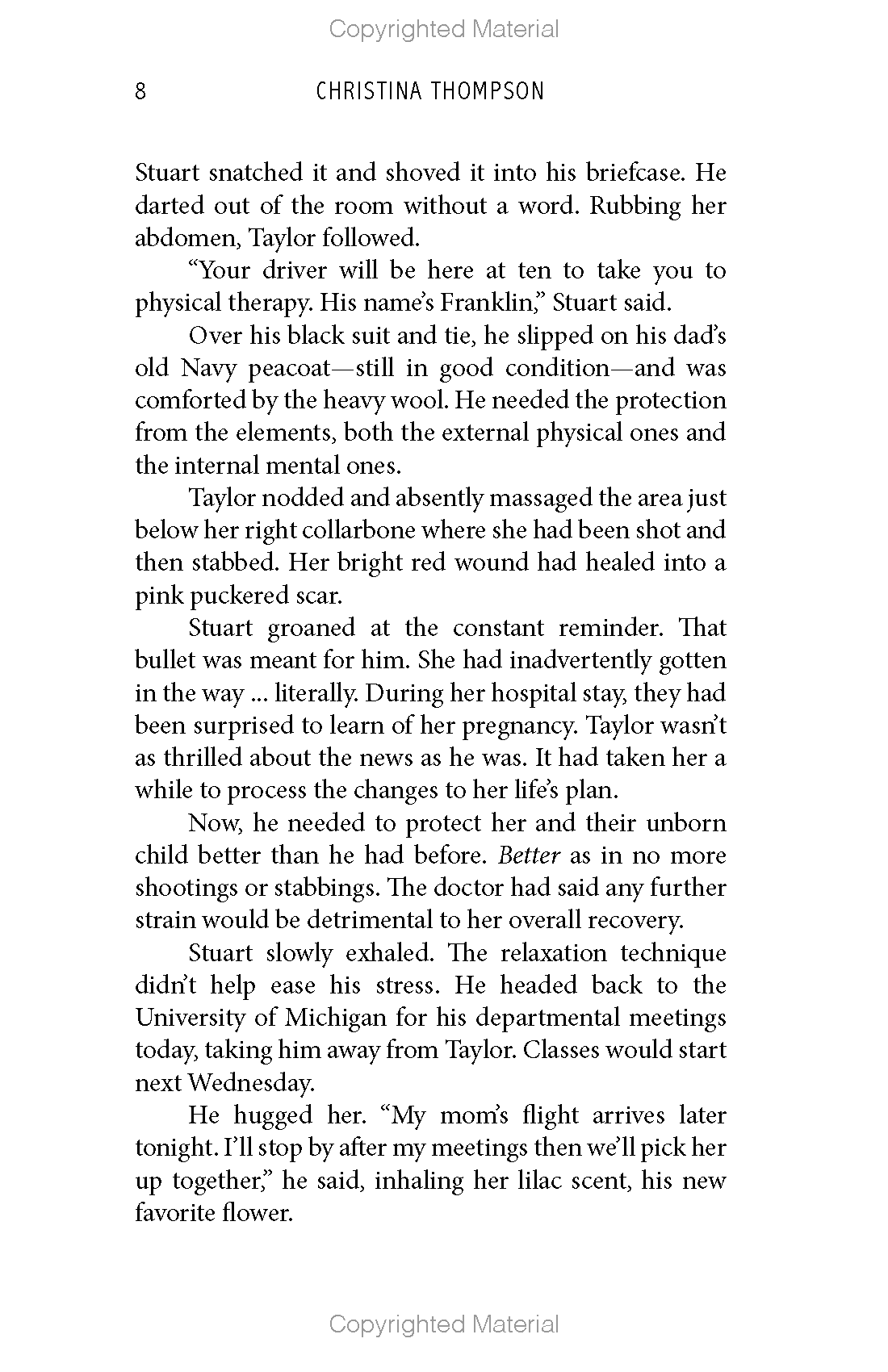 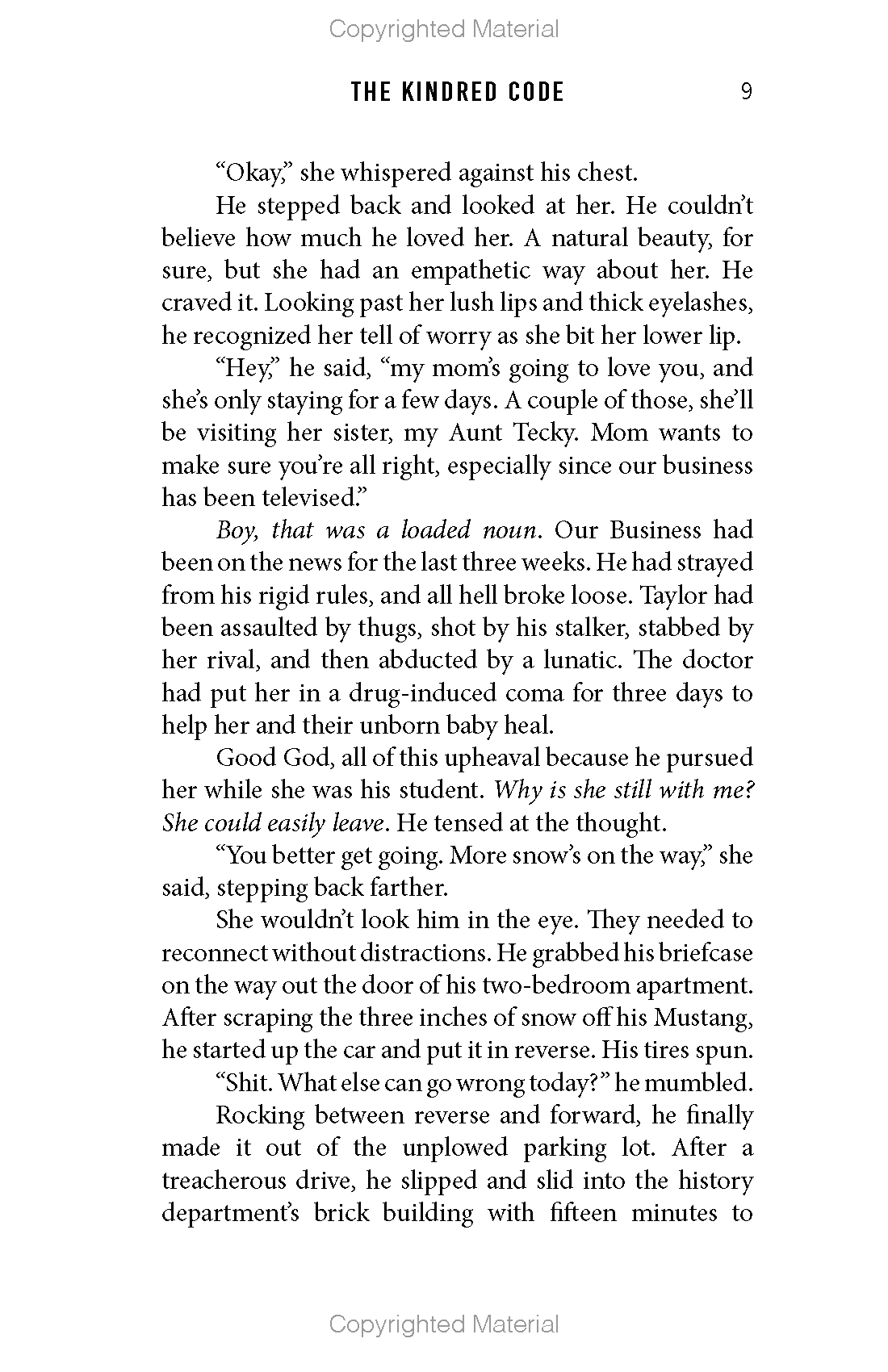 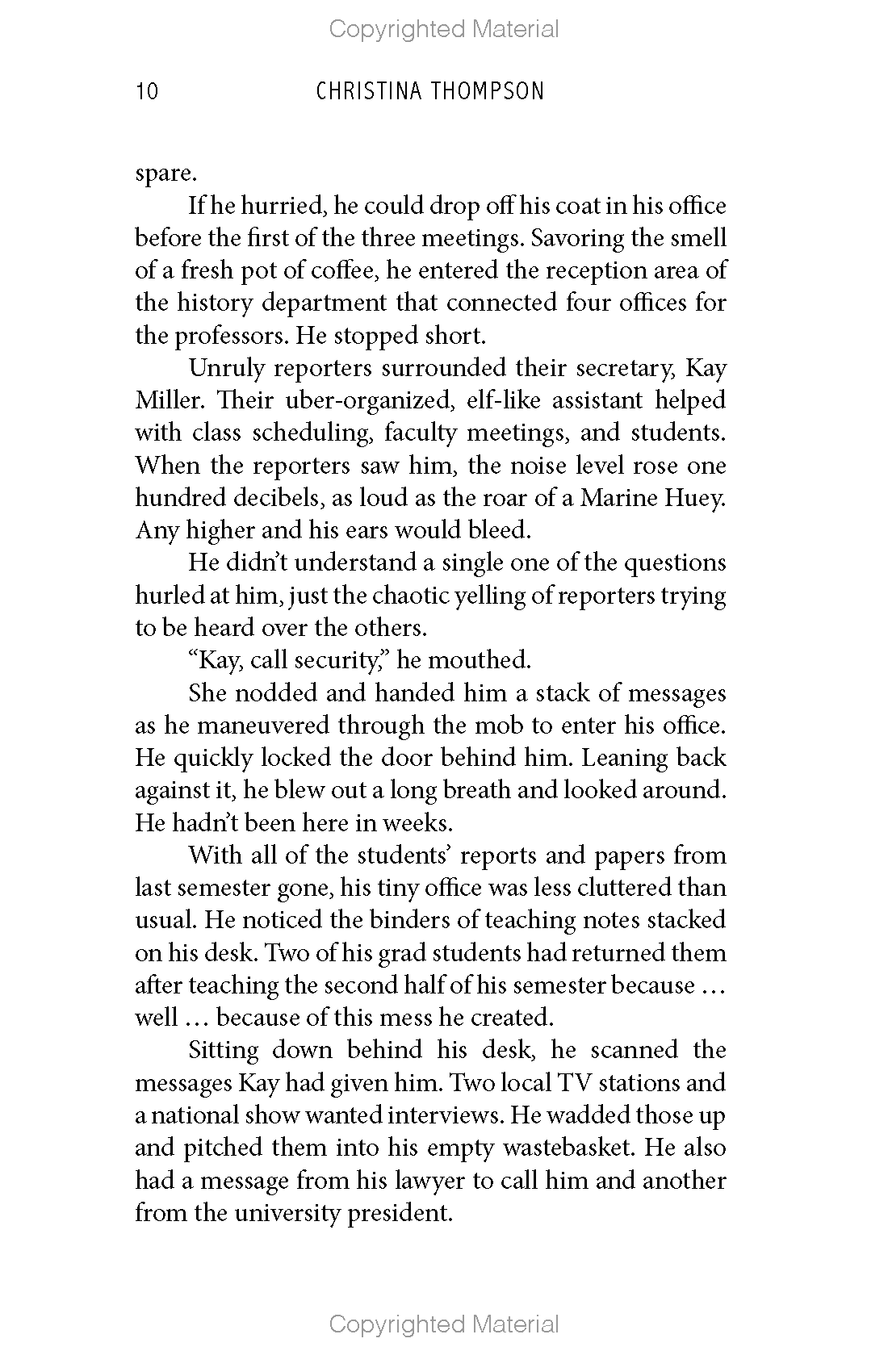 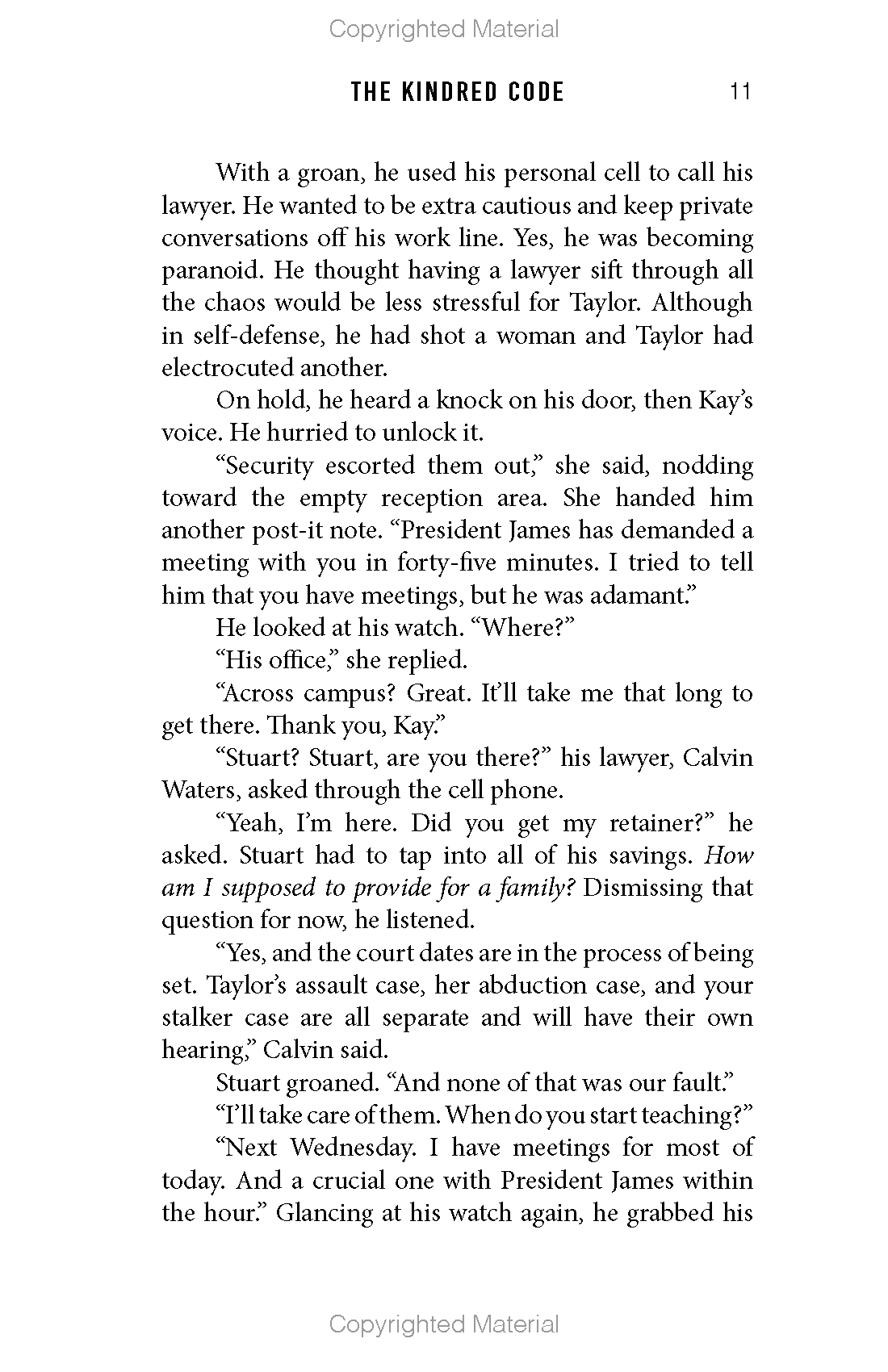 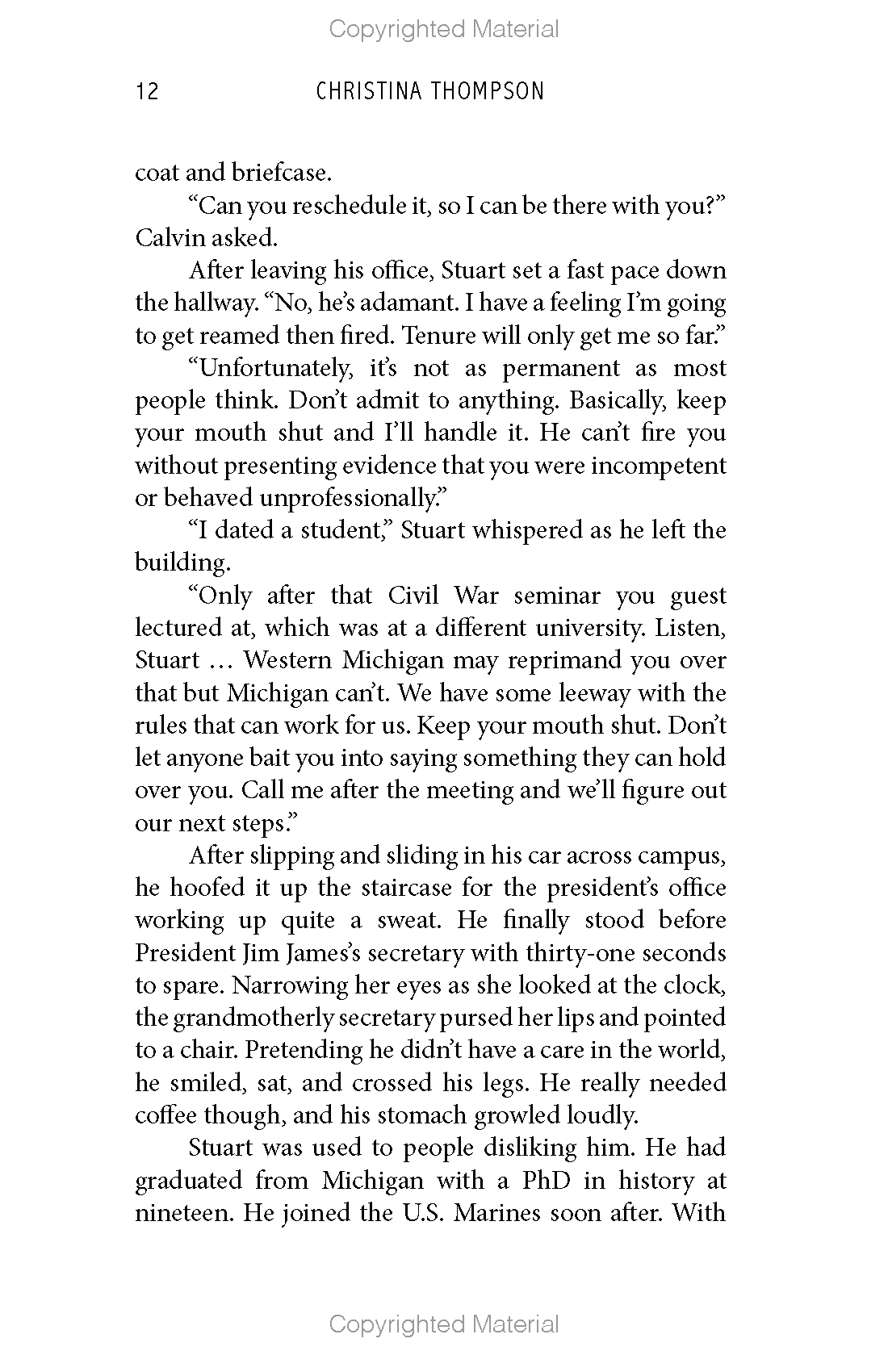 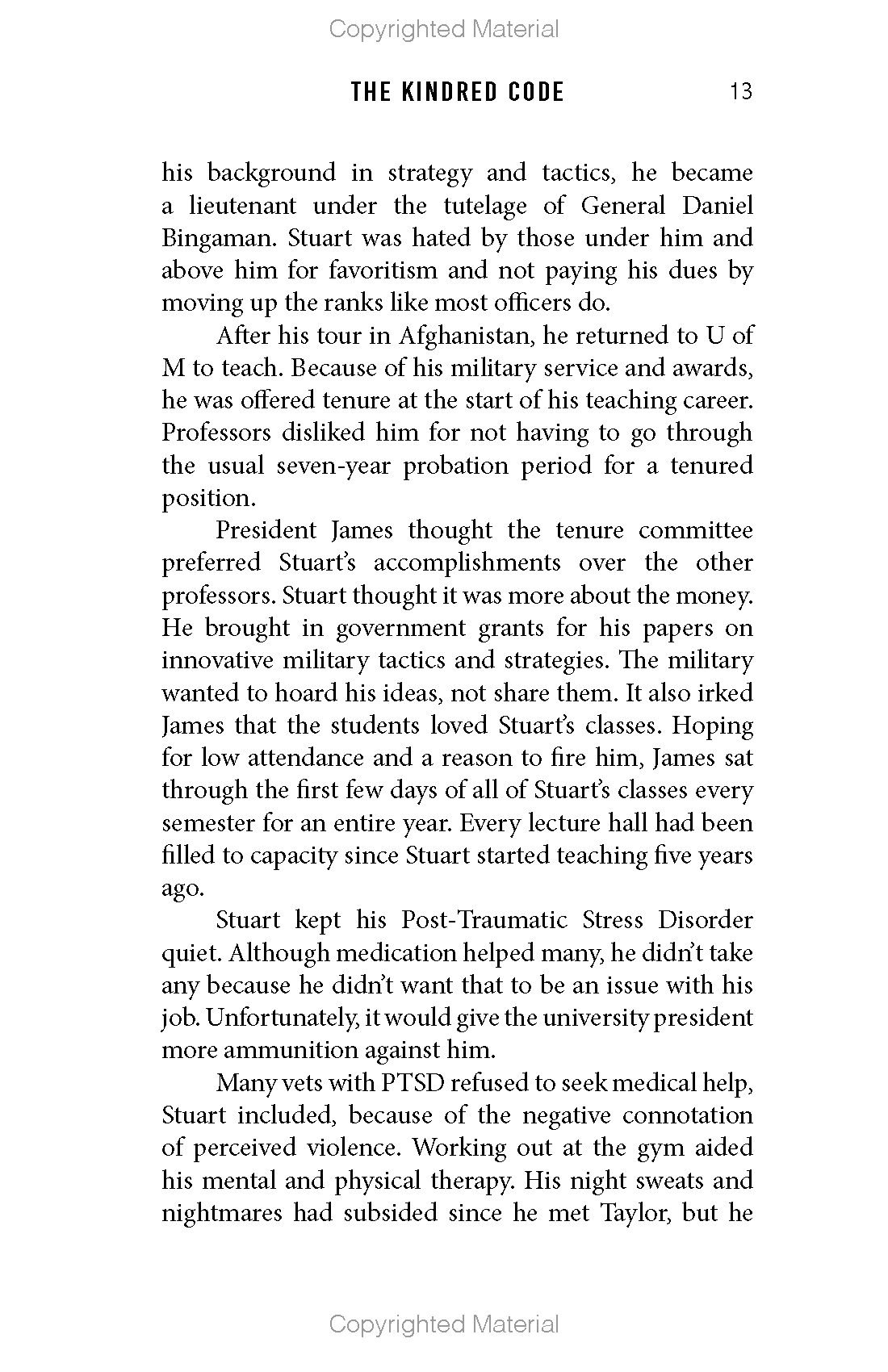 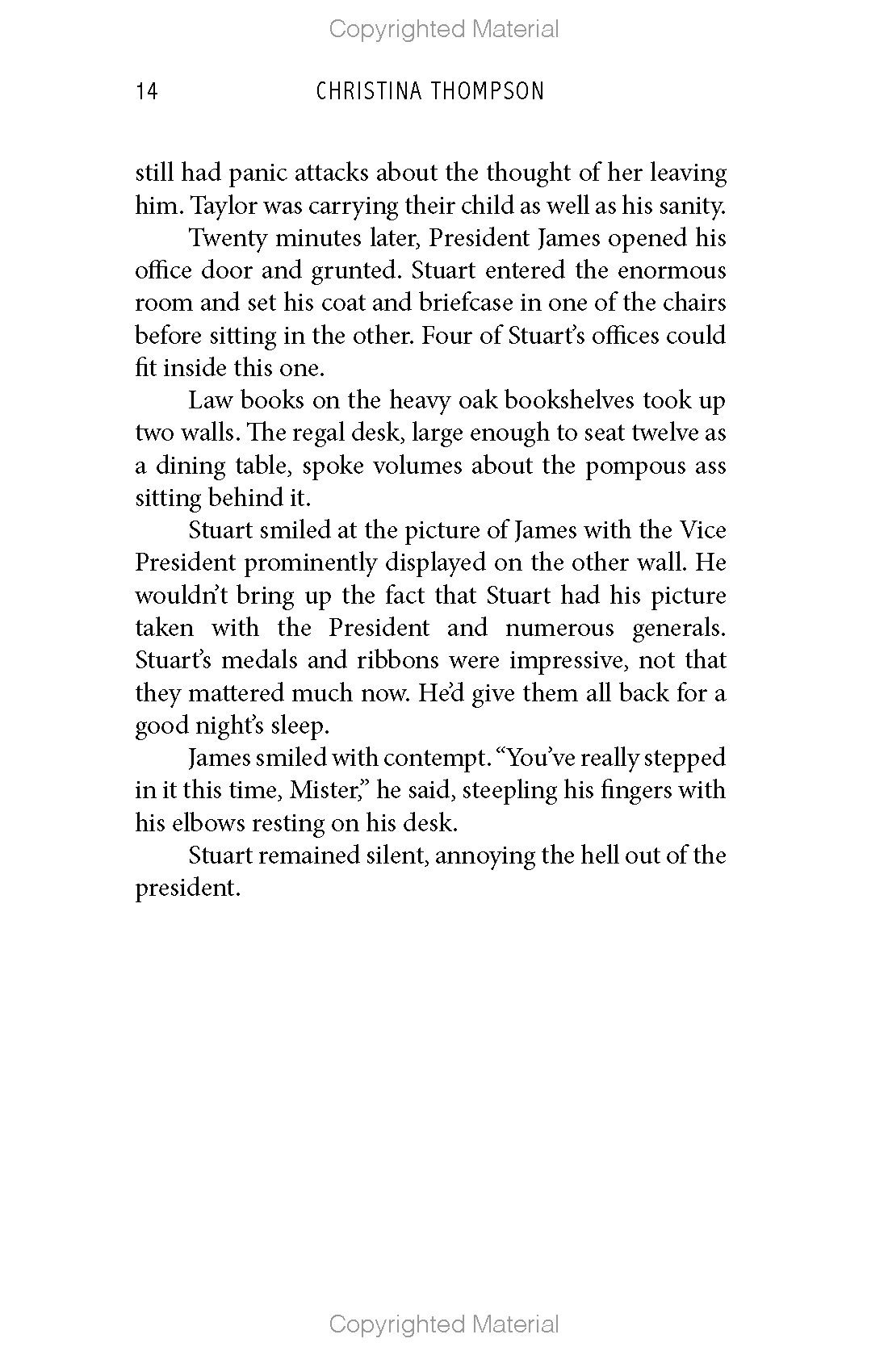 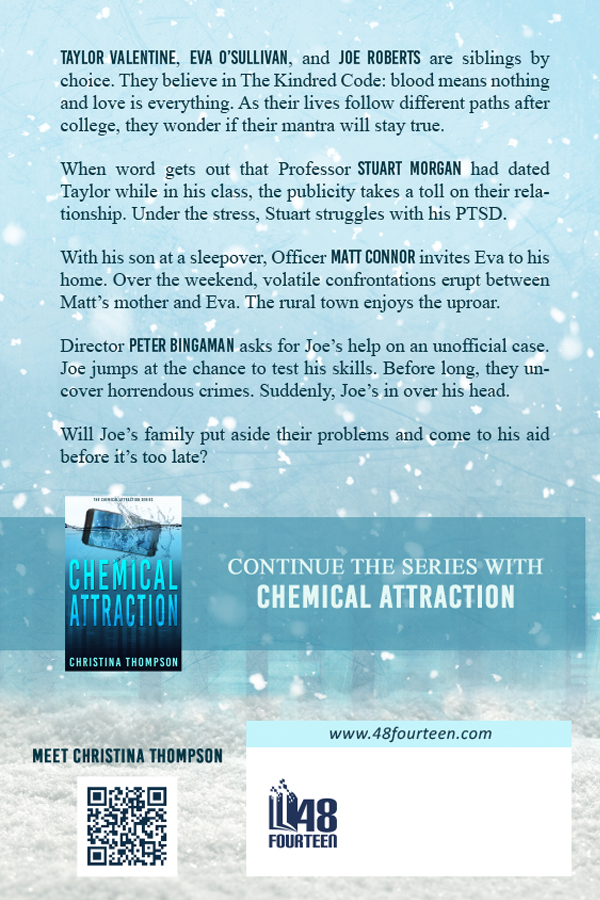 Taylor Valentine, Eva O’Sullivan, and Joe Roberts are siblings by choice. They believe in The Kindred Code: blood means nothing and love is everything. After all, they’ve been together every day since the third grade. As their lives take different paths after college, they wonder if their mantra will stay true.

When word gets out that Professor Stuart Morgan had dated Taylor while in his class, the publicity takes a toll on their relationship. While Taylor recovers from a gunshot wound, Stuart struggles with his PTSD. Instead of sharing their pain, they drift further apart.

With his son, David, at a sleepover, Officer Matt Connor invites Eva to his home. During their romantic weekend, volatile confrontations erupt between Matt’s mother and Eva and David’s biological mother and Eva. The rural town enjoys the uproar. Even on her best behavior, Eva worries about the chaos she brings to Matt and David’s lives.

Before Joe heads to the FBI Academy, Director Peter Bingaman asks for his help on an unofficial case. He needs an outsider, who’s smart and quick on his feet. Joe jumps at the chance to test his skills. Before long, they uncover horrendous crimes. Suddenly, Joe’s in over his head.

Will Joe’s family put aside their problems and come to his aid before it’s too late? And what will that mean for his career as an agent? 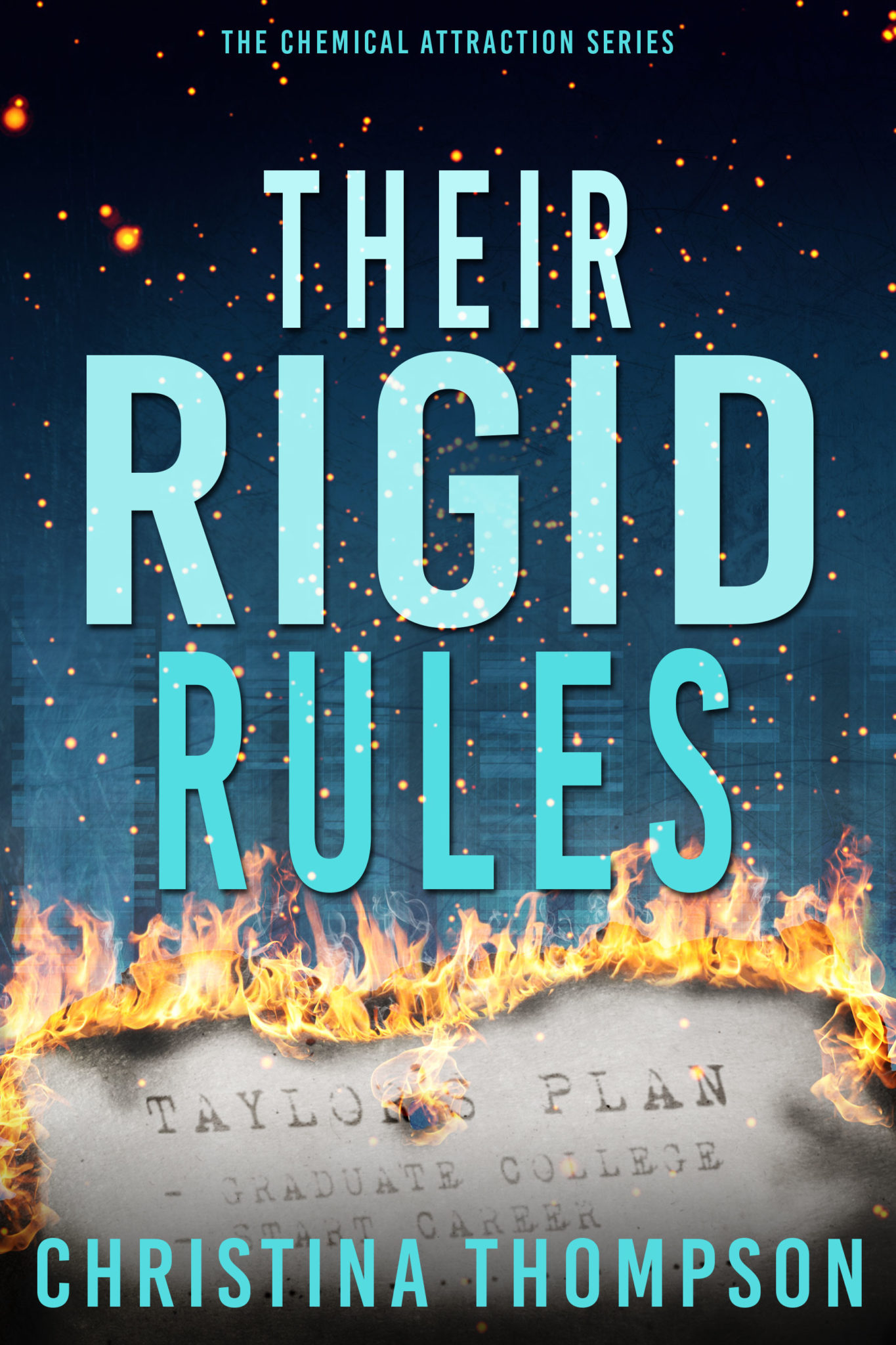 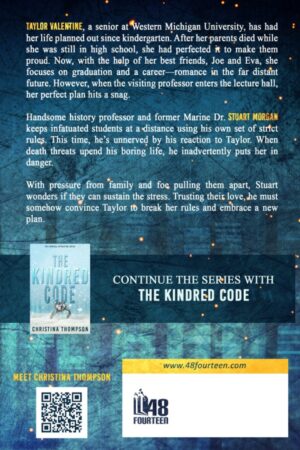 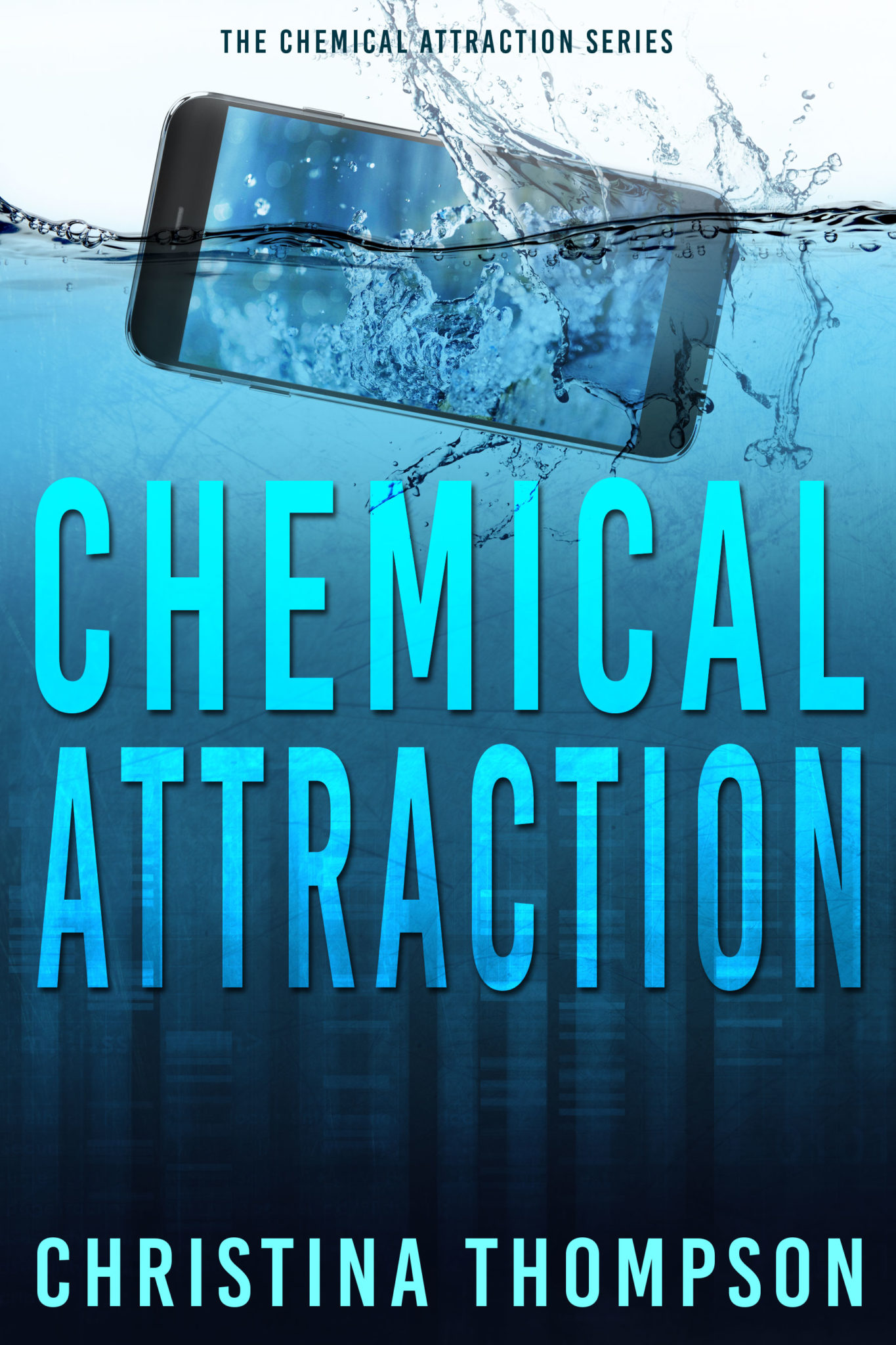 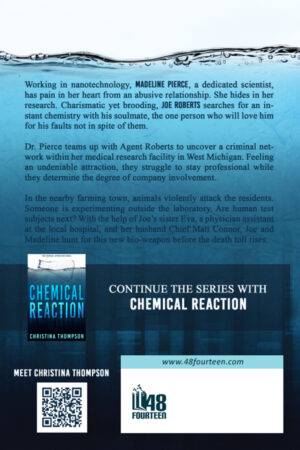 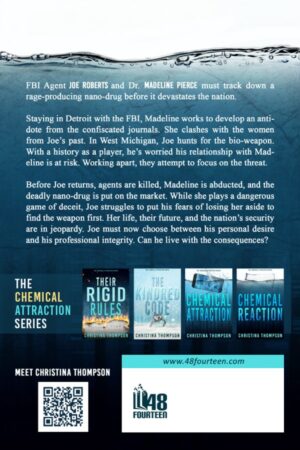 As a former holistic practitioner with a science background, Christina Thompson enjoys writing about the physical science, the emotional workings of our mind and heart, and the spiritual energy that taps into our passions.

Her degree in biology from Nazareth College in Kalamazoo gave her a love of science and a background into the physical realm of the body. Her diploma in Traditional Chinese acupuncture from Midwest College of Oriental Medicine taught her that the mind and spirit affect the body in powerful ways.

She currently resides with her husband, Kraig, in Michigan.

Be the first to review “The Kindred Code” Cancel reply

Fire of the Sea