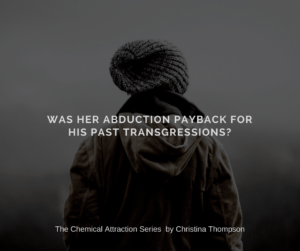 For Joe Roberts, this scene is a culmination of his life choices.  Is he unworthy of love?  With raw despair, he wonders if karma has finally caught up to him, demanding retribution.  Is this karma’s revenge?  Joe thinks so.

An excerpt from Chemical Reaction:

Joe loved his home. His sisters had helped decorate it. He and his brother-in-law Stuart hung out and played video games. But tonight, his apartment was an empty shell. He understood why Madeline hadn’t stayed. To have her find a woman in his bed was not how he wanted to start their new life together. Would they have a life together?

In the bathroom, he scrubbed Madeline’s ring and necklace with a spare toothbrush until every bit of soot had been removed. After a shower, he slipped the ring onto the necklace and then put it around his neck hoping to feel her energy. He felt despair. His or hers?

Opening the bedroom door, he saw the unmade bed and a red stiletto on the floor by his blinking answering machine. With a groaning shout, he ripped the comforter, sheets, and mattress pad off the bed and threw them into a pile. Not caring which telemarketer or utility company left messages, he flung the machine across the room. It hit the wall and shattered. Sitting on the naked mattress, he bent over and rubbed his eyes in frustration.

Was this payback for his past transgressions? Over the years, he had hurt many women. Now, all of their pain, hate, and sorrow hit him in the chest with such a profound force he had to gasp for a breath. Bitter anguish gnawed at his heart as he thought about ruining the only relationship he wanted, needed, craved, and may never have. Without her in his life, he didn’t think he could recover. He wasn’t sure he wanted to. Joe slid to the floor and cried.

How did Joe get to this point in his life?

Check out The Chemical Attraction Series and find out.

Which Character From The Duchess Quest Are You?

Are you City Chic or a Suburban Sophisticate?