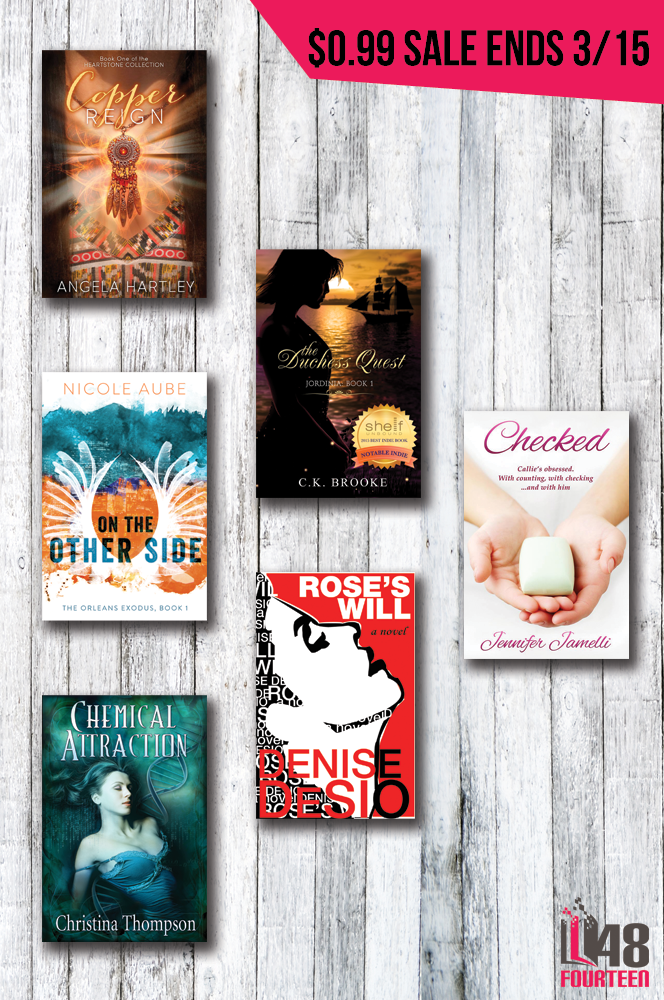 From now until March 15th, feed your reading obsession for less with these books. On sale for only $0.99, exclusively on Amazon.

Native American folklore meets demon rock stars in “Copper Reign,” a fast-paced urban paranormal romance. Fans of “Supernatural’s” heart-stopping storylines and “Lucifer’s” dark wit will fall in love with “Copper Reign.” Temptation is known by many names, and he’s coming for her. (Free with Kindle Unlimited.)

THE DUCHESS QUEST by C.K. Brooke

A lost duchess of a fantasy land was believed by all to be dead. When word leaks that the young woman is still alive, her uncle organizes a quest of diverse and headstrong men to seek her and compete for her marriage hand. Like “Anastasia” meets “The Princess Bride” – for grown-ups! (Sale price is $1.99.)

ON THE OTHER SIDE by Nicole Aube

Hilaria lives in the futuristic, flooded city of Orleans. Thing is, the whole place isn’t under water–only the Quarter.  The other half, called the Ward, is totally dry, but with the Name Acquisition Program (NAP) in control, the only way to earn a life on dry land is to pass their super-secret, super-violent trial system. But, back to feisty and stubborn Hilaria: all she wants is to be a Ward, and her smoking hot best friend, Anthony, is along for the ride. When Hilaria meets Job–this gorgeous blue-eyed Ward who happens to hold an important secret about the NAP operation–she must choose: will she follow the boy who’s always held her heart, or will she give it away to another who may not be as innocent as he looks? Either way, the fate of her entire city rests in the balance, and in NAP’s dangerous game, one wrong choice may end up drowning them all.

Callie spends countless hours staring at appliances to make sure they are really unplugged. She wastes obscene amounts of time checking for murderers in various corners of her house and entire sleepless nights performing pointless checking rituals. Then every spare minute is filled with inspecting doorknobs, chairs, floors, etc. for minuscule traces of germs. Oh, and she does all of this as she counts to three over and over again in her head. She does this every day. Without fail. Dr. Blake just doesn’t fit into her schedule. Until he does. Until Callie begins to trust him. Until she starts to need him. And want him. And…

ROSE’S WILL by Denise DeSio

Got family drama? Absent father? Narcissistic mother? Sibling rivalry? Secrets? Lies? Nutty aunts? Nosy neighbors? And…oh no! A…a…LESBIAN family member? Not to mention a missing will. Rose’s Will, has it all – and more! Compare notes author Denise DeSio. Maybe you’ll find that your family isn’t that crazy after all.

FBI Agent Joe Roberts dates—a lot. He’s never had a steady girlfriend. He’s actually searching for his one. He wants that instant chemistry like his sisters have with their husbands. With anger in his heart, he’s ready to give up on that romantic notion. Then, he meets Madeline.

After an abusive relationship, Dr. Madeline Pierce hides behind her nano-research. When she discovers a criminal network within her facility, she’s partnered with Joe. As she becomes bolder, she wants to trust his sweet words, but she wonders if he’s playing her like the men from her past.

Joe and Madeline explore sinister scientific research and the intense chemistry of love and lust. (Free with Kindle Unlimited.)