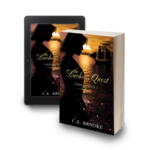 The Books of Jordinia were the first novels I wrote to completion. As a new writer back in 2013, my greatest struggles were wordiness, and learning how to leave out all but the crucial details. As I’ve stated in numerous YouTube interviews and blog posts, two to three books’ length in words and chapters were deleted from the original novels, which are now published as a duology. Today, I’m sharing with you 10 axed characters and plotlines – 5 from each book!

1. Golbain
Golbain was one of the characters I had to remove from The Duchess Quest, for brevity. He was originally the messenger of Francosto Eco – the soldier who saved the condemned duchess – charged with delivering Eco’s scroll to the duchess’s uncle. Of course, Golbain read the scroll in transit and had to make the decision whether or not to deliver it. He was not a very decent person, with less than decent intentions, and died pretty early on in the story. I got rid of him altogether, but borrowed his name for a pirate in Book Two.

2. Ezra MacNeale
The original surviving search party (after the fire) included a fourth man, Ezra MacNeale. Ezra had a woman he loved back home in Bainherd, but was on the quest for the financial reward, in hopes to start a family with her. In early drafts, he parted ways with the three leading males once they reached the Bainherd Plains. (I think primarily he was homesick, but it was also due to Jon bugging the dickens out of him.)

After feedback from beta readers complaining of too many characters in the first hundred pages, I used Ezra briefly in one scene, then killed him in the fire. However, a succeeding plotline, involving his father in the second book, survived the cuts.

3. Pascale and Priya
My first draft of Book One had much more detail about Dainy’s Uncle Pascale and Aunt Priya’s history together, and even hints of Aunt Paxi’s past. When rejection letters from agencies came pouring in due to length alone, those were some of the first chapters axed.

4. Jon and Selu
Jon and Selu’s characters were sort of conceived together, as counterparts. I was going off of the Johnny Depp/Penelope Cruz dynamic their characters shared in “Pirates of the Caribbean 4: On Stranger Tides.” I thought Jon and Selu were a perfect match, until I wrote Chapter 30 and discovered that Dainy and Jon’s chemistry was far more interesting and heartwarming.

5. Pascale’s Precursor
A very early outline (more like a skeleton sketch) had a young Heppestonian man romantically linked with Dainy. He was the one who alerted her aunts about the quest and the men seeking her. Fairly soon, however, I realized that he would result in too many love interests for Dainy, would block her motivation for leaving Heppestoni, and that her character worked better as an unassuming girl, completely inexperienced with men. So, the character was changed to Uncle Pascale, Aunt Paxi’s twin brother, whose relationship with Dainy was fatherly instead.

At one point, when reading the early manuscript, my dad joked that Dainy might end up with Pascale for all he knew. I was surprised by his perception! 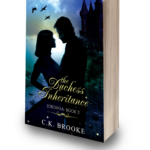 6. Trilogy
Book Two was originally written as two books: The Duchess Inheritance and The Duchess Revival. Both manuscripts were too wordy and contained some major plot and character issues. By the time I rewrote both of them and fixed all the issues, each novel was too short to stand on its own. So, I combined them into one punchy, epic conclusion. I sometimes regret the decision, and wish I would’ve found a way to expand them into three books again.

7. Dainy’s Jealousy
My sister read the original draft of The Duchess Inheritance, way back when it was the second book of a trilogy, before I had a contract on the first book. In that version, Dainy had a much more difficult time accepting Jon’s past promiscuity, and trusting him around other women. My sister complained that Dainy was so jealous and insecure, it drove her nuts. I completely agreed and eliminated many scenes and arguments between the couple, which dramatically shortened the book. As a result, Dainy became much more likable for her unconditional love of Jon and forgiveness of his past.

8. Mac and Indi
The Asiotican translator, Indriel Chow, a.k.a. Indi, was originally romantically interested in Mac, while he had no interest in her – a sort of poetic justice for his and Dainy’s relationship in the first book. But after reading it, my husband and sister still said it didn’t work. Indi now appears in the book as a guide and translator, for expository purposes, but her romantic feelings for Mac were chopped out. I’m very glad for it, because his love story in Part 2 of Book Two ended up being a charming subplot and one of my favorite aspects of the book.

9. Maxos and Franz are a gay couple.
Okay, this actually wasn’t axed. It’s still in the novel, but seems to fly right over everyone’s heads. LOL! 😀

10. One of the main characters might’ve died.
No spoilers here, so I won’t say who. But I definitely toyed on-and-off with killing a character, and giving their partner to someone else. Then I decided I didn’t have the heart to do it. Plus, I’d already conceptualized the character’s children. I think readers would’ve been furious with me, had I done it. I’d have been furious with me too!

~
If you haven’t begun the journey yet, now’s the time to dig in! The Jordinia books are available via Amazon, B&N, BAM and 48fourteen.

Therian, The Bloody Crescent: 1 is HERE!!